“Season of the what” ? The smolt, my friend, the smolt. “What’s a smolt” ? It’s a young salmon; a young salmon ready to embark on one of the great life-altering transformations that mark every youngster’s graduation from childhood to adult life. Hatched in fresh water, among the gravels of their ancestors, all young salmon in this part of the world eventually turn their noses downstream and go with the flow down to tidewater and the distant feeding grounds of the North Pacific. “And when do they do that” ? They do it now, in the Spring. And as they go, as they rush in their silvery hoards for the exits on rivers all up and down the coast, scientists have one of the last few good opportunities to check in with them before they disappear into the trackless ocean. 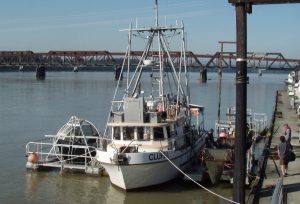 It’s May down at the boat dock in Mission, BC. The muddy, brown Fraser River is huge; as wide as three football fields placed end to end and flowing fast, with occasional rafts of leafy trash and woody debris, even whole trees being swept quickly downstream. Here a team of DFO scientists moor their research vessel, the Clupea, a conventional looking craft made strange and ungainly by the addition of two huge fish traps lashed alongside, port and starboard.

The Clupea patiently plots a series of up and down parallel transects from bank to bank not far from the dock. On each up-stream transect the traps are lowered. One’s a rotary screw trap, fished at the surface like a giant funnel that slowly turns with the river’s flow, sieving and concentrating its catch into a catch-box towards the Clupea’s stern. The other is a barge-mounted vertical trap that can be lowered to any depth up to 20 feet to sample what’s passing-by deeper below the surface. On the Clupea’s up-stream leg, the crew mans the traps. On the down-stream drift to the next station, they process the catch.

Even in late May, a week or two after the main downstream sockeye migration has peaked, the traps collect a surprising number of tiny 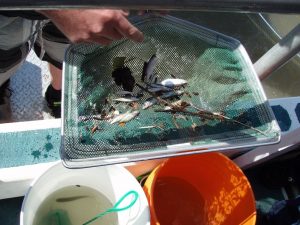 fish of half a dozen species in a 20 minute transect; fish you’d never know were there just below the Fraser’s muddy surface. They look so small and vulnerable in this wide powerful river, totally out of scale, as small as frozen peas scattered on an ice rink. Yet here they are in the catch-box, in numbers. The resident fish, sticklebacks and such, just going about their business. With them, the salmon smolts, intent on their purpose, striving for the sea, determined to survive. I start feeling bad for the ones we’ve trapped.

The crew quickly sort the salmon into buckets and tip the resident fish back over the side. Sockeye are the main focus of this project. The period of downstream migration, from the time the young fish leave their nursery lakes in BC’s Interior to the time they make it to the Strait of Georgia is a critical life history phase and one about which very little is known. Using DNA analysis to identify different stocks of sockeye, the researchers on the Clupea will collect key information on stock-specific sockeye migration timing; the variability of migration timing between years; and, simply the overall abundance of different juvenile sockeye stocks migrating past Mission and into the Strait. While they’re at it they’ll also collect biological samples to assess the fish’s health status by stock. Ultimately this information will be critical to separating the early life stage mortality that occurs in-river, from early life stage mortality in the marine environment – just one of the great unanswered questions about sockeye life history.

But in today’s catch, juvenile coho are the dominant species. As with the sockeye, each fish is measured for length; DNA samples are taken; then each fish is bagged, labelled, photographed and flash frozen on dry ice to be transported to the lab for a battery of tests to determine their overall condition factor. Condition factor is code for health, vigor, robustness – a measure of the juvenile’s physical preparedness for the ordeals they’ll face when they hit salt water.

Why is the project important to the Pacific Salmon Treaty ?

Fraser River sockeye were the subject of the first agreement between Canada and the United States signed a century ago on salmon conservation and management and they remain a key part of the Treaty today. The terms of the Treaty require the Fraser River Panel to obtain spawning escapement goals by stock or stock grouping; and, to meet international fishery allocations; and, to achieve domestic objectives. If there is stock specific mortality during this downstream migration phase (and we know that there is) and mortality in the early marine period (and we know there is this too) and, if these mortalities are related to the overall production of these stocks (as it surely is), then this is essential and critical information for biologists and managers as they strive to effectively forecast returns and meet the terms of the Treaty. 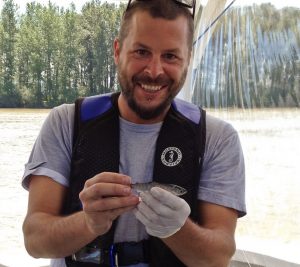 Why is the project being funded by the Southern Fund ?

Downstream migrating juvenile salmon have been regularly sampled in the Fraser River at Mission, BC since the early 1960’s. The work was done by the International Pacific Salmon Fisheries Commission, the IPSFC, the predecessor to the PSC. In more recent times juvenile sampling has been conducted by DFO during even numbered years to evaluate the timing and abundance of pink salmon fry migrating out of the Fraser River system.

In Spring 2012, the Southern Fund funded a project that took advantage of that year’s DFO pink assessment program by adding-on a trial sampling study to catch and further investigate sockeye smolts at the same time. The trial was successful and analysis of the DNA results indicated broad representation of stocks throughout the sampling period with over 30 individual stocks identified (including smaller stocks such as Cultus Lake). These results provided a first ever look at out-migration timing, length, relative abundance and cross-channel distribution, by stock (thanks to DNA technology unavailable in the ‘60’s), for juvenile sockeye salmon in the Lower Fraser River.

The Southern Fund has continued to support this research, which interestingly is now being directly linked to marine assessments occurring in the Strait of Georgia and Johnston Strait that have also been funded, in part, by the Southern Fund.

Timing, abundance, inter-annual variability, condition factor – a snapshot of fundamental information taken at a critical life stage of an iconic species from the biggest salmon producing river in the world.